The Ohio State Buckeyes Men’s basketball team is 25-9 and in the NCAA Tournament for a 6th straight season. Yet, on the Eve of their 2nd Round matchup with In-State foe the University of Dayton, many in Buckeye Nation are unhappy and already penciling in a first round exit in their office tournament pools.

Yes, the 2013-2014 Edition has had a roller coaster season. They started the season with a 15 game winning streak—which was fools gold, because many casual fans built unrealistic expectations—lose four in a row at the beginning of conference play. Then win 4 in a row, lose to a B1G bottom feeder. Win a big game on the road at Iowa, lose at home to Michigan, then get swept by Penn State before beating B1G Tournament Champion and everyone’s favorite to win the National Championship, the Michigan State Spartans.

Regardless, no matter how you slice it, this team has overachieved. First they lost last seasons leading scorer and All B1G player DeShaun Thomas early to the NBA with no adequate replacement. The leading returning scorer coming into this season was Aaron Craft (10.0 ppg). He’s their best player—not most talented—and is known more for his high basketball I.Q., leadership and stingy defense, but a limited offensive game. The expected go to guy coming into the season was in Laquinton Ross, who entered the season off an 8.3 point per game average—with a total of 325 points in two seasons—with a career high of 22 points in an early season blowout over a mid major Northern Kentucky. Plus, he never started a single game in a Buckeye uniform. Ross’ 15.4 points per game average for ’13-’14 is 4.4 points per game less than Thomas’ last season. 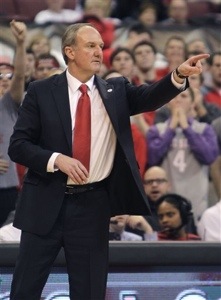 I could argue this is the best coaching job Thad Matta has done since taking his place on the sidelines in Value City Arena. This team should’ve never won its first fifteen games or finished with twenty five wins regardless of the strength of schedule or lack thereof. This team should be in the bottom half of the B1G with Penn State, yet they had a legitimate shot at winning the tournament title in Indianapolis because of their suffocating defense (if only they could’ve find some offense.)

I see these Buckeyes having a good run, because one thing you need in the big dance is a suffocating defense and experienced guard play. They have the experience of Aaron Craft, Shannon Scott and Lenzelle Smith Junior. All three have been to the Final Four and played significant minutes in last season’s Elite 8 run. Playing in the domes and bigger arena’s during the tournament, offense’s struggle, but defense’s travel. That’s a feather in Ohio State’s cap. Just look at the B1G Tournament and what they were able to do in their comeback win over Nebraska and their three point loss to the Wolverines. So I expect Ohio State to be a factor in the next coming weeks, and I won’t be surprised if they extend their four year steak of trips to the Sweet 16 to five.