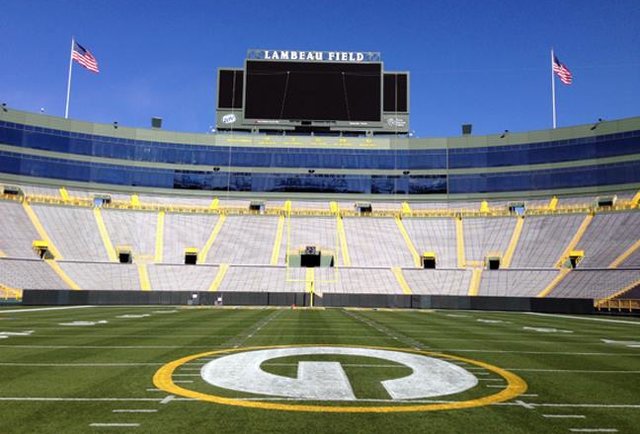 Lambeau Field. Home of the NFL’s greatest franchise? Some think so.

Vince Lombardi (1959-1967; coach, 1968; GM) isn’t just a name on the trophy handed to the Super Bowl Champion for no reason. He led the Pack to three consecutive and six total NFL Championships, five of them in seven seasons. Lombardi led the Pack to victory in the first two Super Bowls (I, II), and is widely regarded as the greatest coach in the history of the game, and to some, in professional sports history. His postseason win percentage of .900 (9-1) is tops all-time, and his regular season win percentage of .738 (96-34-6) is third best in NFL history among coaches who coached for more than 10 seasons. He never had a losing season as a head coach in the NFL. In 1971, the 2-time NFL Coach of the Year (1959, 1961) and 6-time NFL Champion was inducted into the Pro Football Hall of Fame. He’s a member of both the Packers and Redskin’s Ring of Honor where he also coached.

It didn’t end well for Favre in Green Bay, but during the good times it was all smiles.

Brett Favre (1992-2007) will always be synonymous with the number 4, but it should be number one since it’s next to his name at the top of several list in the NFL records books. “The Gunslinger” is the Packers all-time leader in passing yards (61,655); passing touchdowns (442), wins (160), completions (5,377) and pass attempts (8,754). Favre is the only quarterback to win NFL MVP three consecutive seasons (1995,1996, 1997) and in two of those seasons led the Packers to back-to-back NFC Championships titles, and a victory in Super Bowl XXXI. #4 holds many NFL passing records, too many to list, but most impressive is his consecutive games started streak of 286. He’s a member of the 2016 Pro Football Hall of Fame class.

Ray Nitchske (1958-1972) is a 5-time NFL Champion and 2-time Super Bowl Champion (I, II) middle linebacker who led the dominant Packers defense making them the first dynasty of the League. Nitchske was a 7-time All-Pro and won the award for NFL’s top linebacker in 1969. He is a member of the NFL’s 50th and 75th Anniversary Teams, as well as the NFL’s 1960s All-Decade Team. In 1978 he was inducted into the Pro Football Hall of Fame, and the Packers retired his jersey number 66 and inducted him into the team’s Hall of Fame. The Sporting News ranked him the 18th player on their list of the 100 Greatest Football Players, making him the highest-ranked player on the list coached by the legendary Vince Lombardi.

Packers fans what do you think? Do you agree or disagree? Tell me why too. I already can think of one name that may evoke a healthy heated discussion. His name is on the building where the team plays.