Michigan and Louisville treated fans to an instant classic.

Five Months ago the Louisville Cardinals won a thrilling National Championship game over the Michigan Wolverines 82 to 76. There was the rarity of seven players reached double figures, including a 20 point scorer on both teams. Each team hit 8 three pointers while shooting 52 and 46 percent from their floor; a shootout by college basketball standards. The game also featured several future NBA draft picks, up tempo play similar to the pro game and several highlights that will be shown on future broadcast. The game also showed what college basketball could and should be. College basketball is great from mid March to early April, but something needs to change to make it just as exciting from midnight madness in late October until selection Sunday in early March. 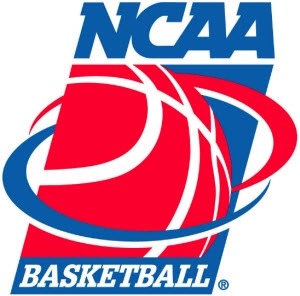 According to Ken Pomeroy, a college badketball statistician who runs kenpom.com, NCAA teams are scoring at an average of only 68.13 points per game. There are several factors contributing to this result, including defense, tightly called games by officials and a defection of top players year after year to the NBA. What follows are my suggestions to help increase scoring as well as interest in the college game in the months leading up to the madness of the NCAA Tournament.

The college game is slow, not because of the lack of athleticism but because of time constraints such as the shot clock. 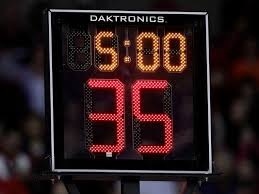 The NCAA needs to consider minimizing the shot clock from 35 seconds and adopting the NBA timer of 24 seconds. This will create more possessions, which will increase scoring. It will also cause ball handlers to push the ball up court – instead of walking – and get teams into their plays sooner before turning it over on a violation. If they don’t want to completely go the NBA route, cutting the shot clock down to 30 seconds would still create a handful more possessions. 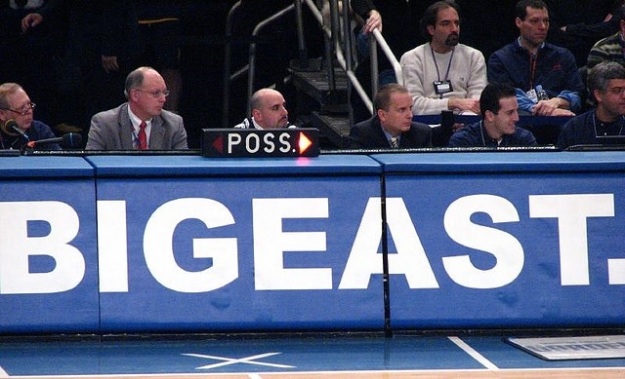 Jump ball ties up should lead to jump balls. Not possession arrows.

Next, get rid of the jump ball possession arrow. ESPN Analyst Dick Vitale has been calling for this for years. It won’t help with scoring, but the jump ball tie up has screwed a few teams late in games and taken the air out of the building. It is even being used as strategy. When I played in college, coaches would tell us to purposely go for a tie up when the possession arrow was in our favor. Coaches do this now today, hence we have players with quick hands like Ohio State’s defensive standout Aaron Craft who reach in while playing defense to create a tie up and get the ball back via a jump ball.

Another NBA rule the college game should adopt is six personal fouls before disqualification. Due to the current five foul limit, coaches have to take key players out early to protect them. This causes a change in game plan and coaches tend to get more conservative. Adding another foul, would allow coaches the opportunity to take a gamble and stick with their original plan.

Finally, change the limit on the bonus. Right now it is at six and all fouls including non shooting fouls count towards it. Once a team hits the limit, the game becomes a free throw shooting contest. I don’t blame officials for this, because I truly believe for the most part, they’re calling the games correct. The only reason you see so fewer fouls called in the NBA is because lesser name players get less benefits than the stars. How many times have you heard a commentator say “he doesn’t have enough stripes to get that call?” or “that star player got away with that on reputation.” That’s where the NCAA game has a leg up on the pros. But increasing the foul limit will keep the game at a steady pace while the officials continue to call it tight.

College basketball is more exciting to watch because of what’s at stake every game when it comes to seeding for the Conference and NCAA Tournaments. But it needs tweaking in order to fully maximize its potential as one of America’s top draws all season long. Now that I’ve solved college basketball’s problems, I’ll turn my attention to fixing college football and the BCS/playoff system. It could be awhile before I finish that project.