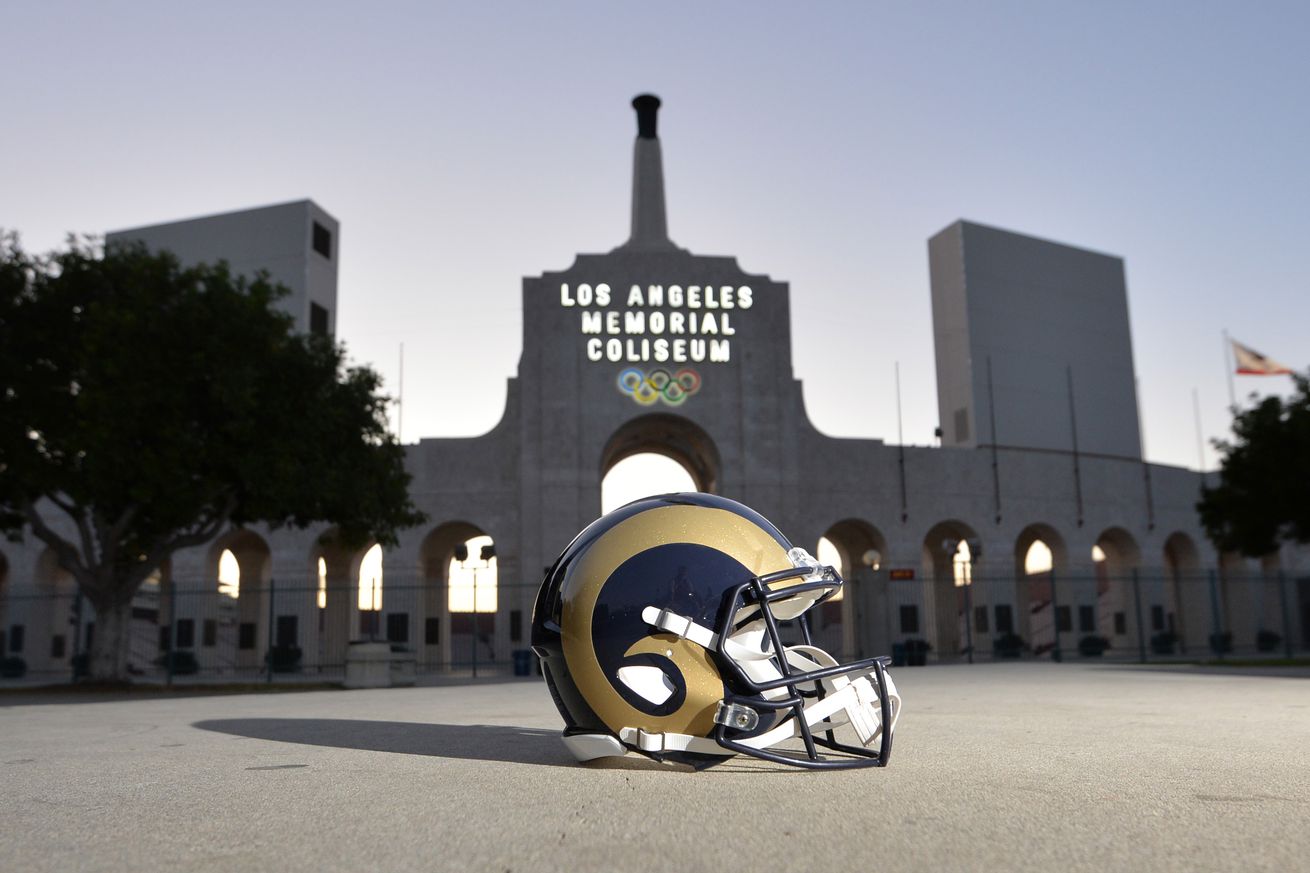 Back again! The Rams have returned to L.A. where they spent 48 seasons before moving to St. Louis. Photo Credit: Kirby Lee/USA Today Sports

The Los Angeles Rams have returned to Southern California, and brought pro football back to L.A. for the first time in 22 seasons since they moved to St. Louis in 1994 and the Raiders to Oakland.

As you can see, the Rams franchise has had plenty of success in their eight year history, and they’ve had seventeen Hall of Fame players and personnel to help make it all happen. That makes my job extremely difficult to narrow it to four. So here is my Mount Rushmore for the Rams organization.

Deacon Jones (1961-1971) coined the team quarterback sack and had the most vicious technique–the head slap, which is now illegal–to beat offensive lineman. Jones played in the era before the statistic became official, but had it been, according to a Pro Football Weekly article in 2000, he would have accumulated 173.5, which would make him third all-time in NFL history today, behind Bruce Smith and Reggie White. His 21.5 sacks in 1967, and 22 in 1968 in only 14 games would stand today as the two greatest seasons in league history. Jones went on to win Defensive Player of the Year both of those seasons. The 8-time Pro Bowl and 8-time All-Pro selection is a member of the NFL’s 50th and 75th Anniversary Teams, as well as the NFLs 1960s All-Decade Team. Known as the “Most Valuable Ram of All-Time,” the team retired his jersey number 75, and he was inducted into the Pro Football Hall of Fame in 1980.

Merlin Olsen (1962-1976) was, and still is the most accomplished Ram to play his entire career with the franchise. His 14 Pro Bowl selections puts him in a first place tie with Bruce Matthews, Tony Gonzalez and Peyton Manning for the most in NFL history. 9-times, the defensive tackle was selected to the All-Pro team, 6 of them 1st-team honors. He is a member of the NFL 75th Anniversary All-Time, 1960s and 1970s All-Decade Teams. Like his teammate Deacon Jones, he played in an era when major defensive statistics weren’t recorded. However, his contributions were not lost. In 1999, The Sporting News listed him the 25th best player of All-Time on their Top 100 Greatest Football Players list. He was inducted into the Pro Football Hall of Fame in 1982, the Rams Ring of Fame, and the team retired his jersey number 74.

Eric Dickerson (1983-1987) has his name plastered across the NFL record book in several rushing categories. While he played for a total of four teams in his career, he’s mostly known for running past opponents in the blue and yellow while sporting his iconic prescription goggles and Jerri curl. Dickerson was a 4-time Pro Bowl and 4-time 1st-team All-Pro with the Rams in their first stint in Los Angeles. He also won the NFL rushing title three times, and the NFL MVP and Rookie of the Year in 1983 as he set the rookie rushing record with 1,808 yards. He followed up his MVP campaign by rushing for a NFL record 2,105, which still stands today. Three times he won the NFC Offensive Player of the Year award (1983, 1984, 1986) and the NFL Offensive Player of the Year award in 1986. He’s a member of the NFL 1980s All-Decade Team, the Rams Ring of Honor, The Pro Football Hall of Fame, and the team retired his jersey number 29.

Let me know what you think Rams fans. Did I get it right? Should Kurt Warner, new Hall of Famer Orlando Pace, or someone else have made the list?