When the Iowa Hawkeyes drubbed the Buckeyes 55-24, pretty much ending their College Football Playoff hopes, many Ohio State fans threw in their collective towels and called the 2017 season a loss season. But, if the Buckeyes win out, they’ll be B1G Champions for only the second time in Urban Meyer’s tenure. A conference title will land them in either the Fiesta or Orange Bowl. There’s still the very small possibility of a College Football Playoffs birth if chaos occurs. So there is a LOT left to play for.
However, this defeated mindset leaves me ashamed to be an Ohio State fan sometimes. This fan base needs some perspective and I’m here to offer it to you.

As a 37-year old who was born after the Woody Hayes era unceremoniously ended, I missed the golden age he led in Columbus that propelled the Buckeyes to national prominence with 5 National Championships, 13 Big Ten titles and 16 wins over “That Team Up North” in 28 seasons.

My father raised by me on Buckeye football. I listened to him tell stories about the greatness of this program before my birth, yet as I watched as a youngster teams lead by Earle Bruce, I didn’t see it. There were no national titles, but he did win 4 Big Ten titles, 5 bowl games and was 5-4 against the Wolverines. Coach Bruce only had one top 5 finishes (1979) and had eight consecutive seasons of 3 or more losses. This program was no longer on the level of the Notre Dame’s, Nebraska’s, Oklahoma’s, Miami’s and Penn State (pre-B1G affiliation) who dominated NCAA football during that period.

Then there was the Cooper era, the period that hurts and haunts me still. Only 2 wins and a tie in 13 tries against TTUN. 7 bowl losses. 3 Big Ten Titles and No National Championships despite reaching the top 10 in Associated Press Poll 7 times and starting the season in the Top 10 four times.

It wasn’t until I was a 22-year old senior at The Ohio State University that I saw my favorite team play for a national title and win it, led by Jim Tressel, Craig Krenzel and super freshman Maurice Clarett. 22 years it took for me to experience my team win it all. Compare that to a current 22-year old Ohio State fan that has seen the Buckeyes win 2 National titles (2002, 2014), play for another 3, 9 outright/shared B1G titles and 15 wins in “The Game”, which include a current 5-game win streak. I’ll gladly trade my first 22 years of Buckeye football fandom for that of a current 22-year old.

These last 15 years especially have spoiled Buckeye Nation and distorted our perspective of how hard it is to truly be great in college football.

The schools that dominated the college football landscape of my youth (Notre Dame, Nebraska, Miami, Georgia, Michigan) and even the turn of this century (Miami again, Texas, USC, Florida and Florida State) have all gone through multiple losing seasons, coaching changes and program derailing scandals. Meanwhile, the Buckeyes have been at the top or in the thick of the Championship race. And when there has been a down season, scandal or coaching change (2011), the Scarlet and Gray quickly bounced back (2012; 12-0).

In the last 25 years or so, we’ve never had to hear the phrase “The Buckeyes are back!” like the Miami Hurricanes are hearing this week ahead of their matchup with the Fighting Irish.

So as you watch this 2017 version fight for a B1G Championship in clearly the most challenging Power 5 conference this season, remember the main goals are still obtainable. But more importantly, there are a lot of fans bases that would love to have our “problems.” 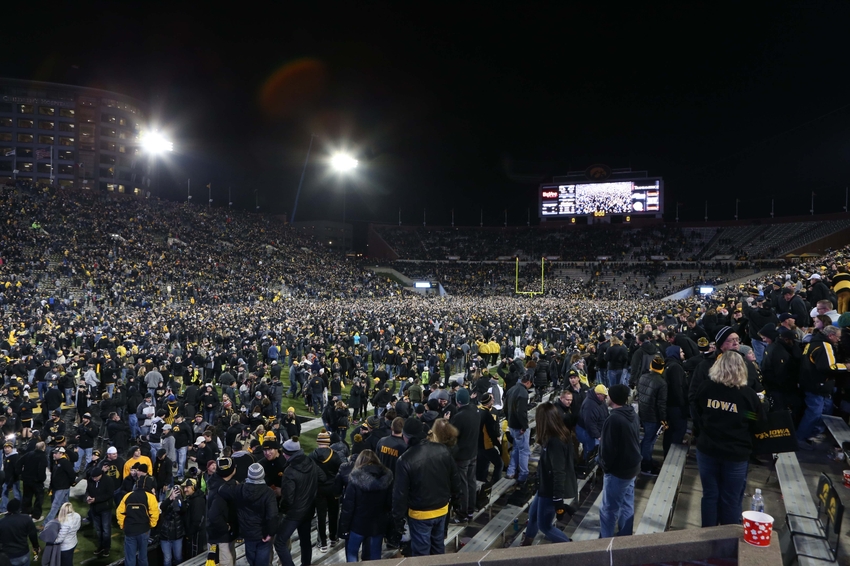 The roller coaster of emotion from last week’s thrilling comeback win to this week’s crushing defeat is only surpassed in my mind by the 2006 win over “TTUN” followed by the National Championship blowout loss to Florida a little over a month later. The Iowa Hawkeyes stomped out the Ohio State Buckeyes College Football Playoff hopes with a 55-24 victory.

Buckeye Nation knew it was going to be difficult. The warnings of a “trap game” were everywhere around Columbus. Iowa had Penn State on the ropes until the final seconds earlier this season. The Hawkeyes have completed a handful of historical upsets over Top 5 Associated Press ranked teams at Kinnick stadium since 2008. So when J.T. Barrett threw his second interception of the season for a 30-yard touchdown return eight seconds into the game, Buckeye Nation sensed they were in for a long uneasy day.

Here are my takeaways from a game Ohio State will love to forget.

The vaunted Silver Bullets defense got punked up and down the field by the Hawkeyes giving up 487 total yards (244 passing, 243 rushing) and 48 points. That’s the most points Iowa has EVER scored on an Ohio State team. On the season Iowa averaged only 28 points per game and 345.9 yards per game coming into Saturday’s game. Both of those stats rank 10th out of the 14 teams in the Big Ten.

The linebackers have shown no ability to effectively cover opposing team tight ends. The combo of T.J. Hockenson and Noah Fant caught 9 passes for 135 yards and 4 touchdowns receptions. The ability to come up with a scheme to cover tight ends has been a problem for this team all season. Mike Gesicki made key plays for Penn State to move the chains last week. And that’s where I start to point the finger at the coaching staff.

Iowa ran a pro style offense that defensive coordinator Greg Schiano clearly wasn’t prepared for. During the ESPN broadcast, color analyst Brian Griese said Iowa head coach Kirk Ferentz went back to Schiano’s days as Tampa Bay Buccaneers head coach for film to prepare for this game. His last season there was 2013. 2013! That’s how you out coach someone, by looking for any and every edge you can get. All Schiano had to do was watch Iowa’s loss to Penn State.

* DOES URBAN STILL HAVE IT?

This has been itching at me for some time. At some point we need to question Urban Meyer’s ability to get his team’s ready for big games. I don’t care what Iowa’s record was coming into Saturday this was a big game (It was 5-3). Especially when you look at what was at stake for the Buckeyes in the College Football Playoffs. From Clemson in last season’s CFP, Oklahoma this season, Michigan State in 2015, the 2013 B1G championship game loss to the Spartans and the Orange Bowl loss to Clemson after the 2013 season, Coach Meyer has lost his luster in the games that Buckeye Nation has come accustomed to watching him win. That belief in him goes back to his 2006 National Championship victory over the Buckeyes with Florida. Did he lose it? We’ll find out in the next coming weeks.

All season I’ve been in his corner when Buckeye fans were calling for anyone to be under center but him. Then he goes out there last week and plays the best game of his career in a scarlet and gray jersey and tossed his name in the Heisman race only to come up with this 4-interception dud. His first interception in 190 passing on the first play from scrimmage of the game definitely set a bad tone and continued throughout the game. He looked like a true freshman playing his first Big Ten road game, not a 5th-year senior. Barrett was rattled and making terrible reads when his first receiver wasn’t open. He finished 18 of 34 for 208 yards and 3 touchdowns to go along with those 4 picks.

* B1G CHAMPS IS STILL A POSSIBILITY

Even with all the negatives, there is still something to play for. The Big Ten East division is still up for grabs with Michigan State’s win over Penn State. Next week’s showdown between the Spartans and the Buckeyes at the ‘Shoe all but decide who heads to Indianapolis to play for the conference championship and a New Year’s Six Bowl game. Hopefully they can bounce back. Kickoff is set for Noon.

The Big Ten is loaded with talent amongst their fourteen teams, and it’s showing on the preseason awards watch lists.

The watch list for the Jim Thorpe award, which goes to the top defensive back in college football was announced Moday. Only two players from the conference made the cut, Juniors Vonn Bell from Ohio State and William Likely from Maryland. But, last week the Maxwell, Bednarik, Nagurski and several other major prestigious individual awards announced their preseason watch list, and the defending National Champion Buckeyes, and the Big Ten were well represented. Here’s a look at the players from the conference on each list.

Eleven B1G players are on Maxwell Award watch list, which goes to the player voted America’s College Player of the Year. As expected Ohio State Junior running back Ezekiel Elliot is on the list, he is also an early favorite for the Heisman Trophy. Joining him from OSU are quarterbacks Sophomore  J.T. Barrett, Junior Cardale Jones and Senior Braxton Miller. The Big Ten is also represented by:

The Bednarik Award which goes to college football’s Defensive Player of the Year, also has eleven Big Ten players on the list, headlined by Buckeye defensive end Joey Bosa a finalist in 2014. He’s joined by Buckeye teammate Senior linebacker Joshua Perry. The rest of the list goes:

If one of the five Buckeyes on the Lombardi Award watch list wins, they would be the sixth in school history, giving them the most in NCAA Football history.