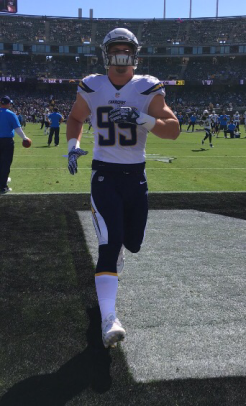 Bosa made his long overdue debut with the Chargers and had a career day. Photo Credit: Chargers.com

The highest Buckeye selected in the 2016 draft–3rd overall–made his long awaited debut in week five and appeared to be well worth the wait. Defensive end Joey Bosa lined up for the San Diego Chargers against the rival Oakland Raiders after missing the entire preseason to a contract holdout, and the first four games of the regular season to injury. Bosa had 5 tackles (2 solo) and two sacks in the Chargers 34-31 loss to the Raiders. His fellow rookie, linebacker Joshua Perry, had 3 tackles.

Ezekiel Elliott had another explosive day for the Dallas Cowboys. The 4th overall pick in the 2016 draft rushed for his third consecutive 100+ yard game. Zeke had 134 yards and 2 touchdowns on 15 carries. He also added 3 receptions for 37 yards in the ‘Boys 28-14 victory over the Cincinnati Bengals. On the other side, kicker Mike Nugent only score 2 points for the Bengals on two extra points and he missed a 50+ yard field goal. 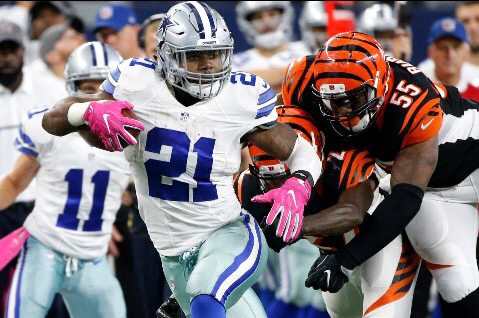 Elliott tied with Hall of Famer Emmitt Smith for the most consecutive 130+ rushing yard games vs. the Bengals. Photo Credit: Cowboys.com

The week got off to a good start on Tuesday for former Buckeyes with the news that 11-year linebacker A.J. Hawk signed with the Atlanta Falcons on Tuesday after being without a team for the first four weeks. Hawk was drafted number 5th overall in 2006 by the Green Bay Packers where he played until 2014 and won a Super Bowl ring (SB XLV). He spent the 2015 season with the Cincinnati Bengals. Hawk didn’t register any stats in the Falcons 23-16 upset victory over the previously undefeated defending Super Bowl Champion Denver Broncos.

There was supposed to be a prime Scarlet and Gray match up on the field in the trenches in Pittsburgh when the New York Jets faced off against the Steelers; center Nick Mangold versus defensive lineman Cam Heyward. But, both left the game with injury. Heyward left in the first half with a hamstring injury and did not return. Mangold left in the second half with a lower leg injury. Meanwhile, Steelers linebacker Ryan Shazier was inactive for the second straight week, while the guy who replaced him at Ohio State, Darron Lee had 4 tackles (4 solo). Lee continues to be New York’s leading tackler on the season. The Steelers won 31-13.

Terrelle Pryor seemed the be only Cleveland Brown to show up in their blowout loss to Tom Brady and the New England Patriots. Pryor had 5 catches for 48 yards and 2 rushes for 3 yards, he also had to play quarterback as the starter Cody Kessler and his backup Charlie Whitehurst were both knocked out of the game with injuries. TP was 1 of 3 passing for 5 yards as Cleveland lost 33-13. Special teams ace and U.S. Olympic Rugby player Nate Ebner had 3 tackles for the Patriots in the victory.

Running back Carlos Hyde of the San Francisco 49ers rushed for 78 yards and earned his lead leading 6th rushing touchdown on 22 carries Thursday night against the Arizona Cardinals. The self-proclaimed “El Guapo” also caught 6 passes for 36 yards in the Niners 33-21 loss to the Cardinals.

Rookie Wide receiver Braxton Miller of the Houston Texans made his return to the lineup after missing the last two games with a hamstring injury. He had one catch for 12 yards in the Texans 31-13 loss to the Minnesota Vikings. Linebacker John Simon had 6 tackles (3 solo) for Houston in the loss.

Other OSU Alumni news of note, New York Jets rookie wide receiver Jalin Marshall was inactive for the loss to the Pittsburgh Steelers, while rookie defensive back Eli Apple of the New York Giants missed the Sunday night matchup with the Green Bay Packers with a hamstring injury. Rookies Vonn Bell, Michael Thomas and veteran linebacker James Lauriniatis of the New Orleans Saints were on a bye this week. Their next game is next Sunday versus the Carolina Panthers in Nawlins.