Look into the rafters of the beautiful almost 5-year-old Amway Center and you’ll see beautiful steel beams and only handful of banners celebrating a couple of Eastern Conference championships (1995, 2009) a five Division Championships, a few Orlando Predators Arena Football Championships and a jersey number six retired for the Magic fans.

It’s time for them to hang more and I’m not just insinuating the kind celebrating team achievements, but the individuals who’ve made this franchise relevant. Central Florida has a decent hoops history and as the Hall of Fame in the concourse of the Amway Center displays, it is one to be proud of, but that can only be seen when you visit the arena.

Large retired numbers on banners hanging from the rafters can be seen on camera when a videographer shooting the game for broadcast gets a shot of them when returning to the game from a commercial break or during other stoppages of play. Wouldn’t the Magic organization want the rest of the NBA fans base catching a game on League Pass to see such a display? I’ll answer for them, yes.

While there is only one player in the Magic’s history that is a sure-fire Hall of Famer—more on him later—there are some others who are very significant to Orlando basketball and they should be honored.

The team could start with honoring the first draft pick in the organization’s history and current community ambassador Nick Anderson. Number 25 was drafted with the 11th pick in 1989 and spent 10 years on the court in the blue and white and helped Orlando to the 1995 NBA Finals. When he finished his career he was the Magic’s franchise scoring leader with 10,650 points—he’s since been passed by Dwight Howard—and he’s still the leader in a few other categories including games played (692), steals (1,004) and field goals made (4,075).

Anderson is the epitome of what the standard should be for Magic players on and off the court, this would be a great way to make that statement strong.

Number 32 deserves to be in the rafters for Shaquille O’Neal. The “Diesel” only spent 4 seasons in central Florida wearing the blue and white with pinstripes, and his time ended tumultuous, but he is the guy who made Orlando Magic basketball relevant.

He is the organizations first ever NBA All-Star (1993-1996), he led them to their first ever playoff appearance (1994) and NBA Finals (1995). Shaq’s name is still prominent in the Magic record books. If it weren’t for him, who knows if there would still be a team in central Florida. Shaq became a global superstar in Orlando staring in movies and putting out platinum rap albums. O’Neal proved that you could become a Superstar in a “small market.”

Even though he never won a World Championship with the Magic, that hasn’t kept most fans from associating him with the Magic.
The team is inducting him into its Hall of Fame on March 27th, but a jersey retirement would be better. Most NBA fans still associate that number in those colors with him. It’s not like, say number one which had a few greats wear it in Magic colors.

Speaking of #1, it should be retired for Penny Hardaway. Tracy McGrady had a good run in that jersey, but in most fans mind, that jersey conjures up images of Mister 1Cent. In his prime, before the mountain of injuries, Penny was a perennial All-Star (94-98) and without Shaq kept the Magic in the playoffs.

Penny’s impact on the Magic’s history is very similar to his running mate Shaq. Together they led the Magic to their first playoff appearance (1994) and NBA Finals (1995). He also drew his share of the national spotlight with his Nike commercials starring Chris Rock as “Lil’ Penny”, Hardaway’s alter ego to promote his signature shoes which are still widely popular and sought after decades years after he retired. 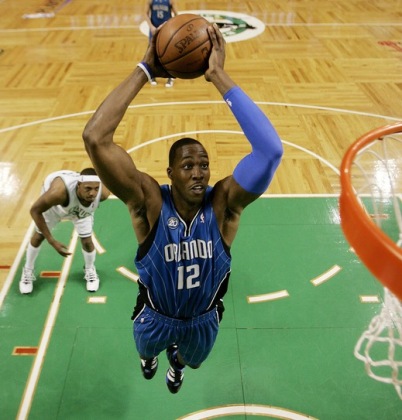 D12 is the most accomplished player in Magic history. Photo Courtesy: Sun Sentinel

This one is obviously a ways off in terms of years, but in the future the team should honor Dwight Howard by raising his number 12 to the roof at Amway.

D12 led the Magic to their second NBA Finals appearance as well as winning three Defensive Player of the Year awards (2008-2011). He’s probably a borderline Hall of Famer in the minds of most voters, but if he does get selected, he will be remembered most for the part of his resume built wearing blue and white. That would make him Orlando’s first and only Hall of Famer. But what about Shaq? He will be known more for his time in Los Angeles and maybe even Miami.

Even though Shaq, Penny and Dwight left on bad terms, in the case of the first two the 25th Anniversary celebration proved time has healed old wounds. Hopefully by the time Dwight is finished his relationship with central Florida will be better.
The organization did a great job of honoring its past during last season 25th anniversary season and has a great Hall of Fame exhibit on display in the Amway concourse, this would be just another great way to show off the Magic’s great history.